A support rod for supporting a number of clothes hangers includes an elongated rigid bar having transverse openings therein for receiving the clothes hangers, and a pair of hooks pivotally mounted at the ends of the bar about axes which extend transversely of the bar. The bar can be suspended by one or both of the hooks. Also, the hooks can be swung toward each other in the long direction of the bar and manually grasped so that the bar can be held by one hand while a user places hangers through the bar openings with the other hand. 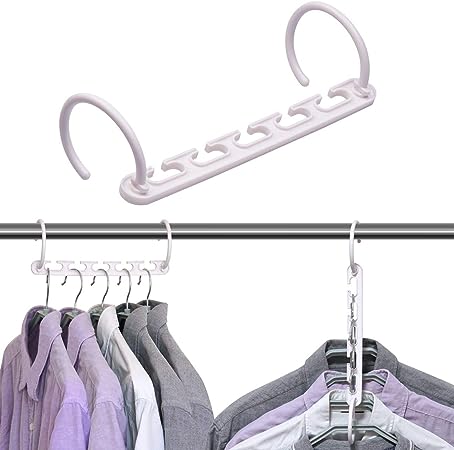 Due to the fact that the length of the hooks is dimensioned in such a way that the support bar can be held by a human hand at the hooks which are swung toward each other, it is possible to manipulate the multiple hanger without the utilization of special means for hanging up the bar.
An embodiment of the support rod forming the subject matter of the invention is illustrated in the drawing. In the drawing:
FIG. 1 shows a view of the support rod lying on a surface approximately in its natural size,
FIG. 2 schematically shows the same support rod in a smaller scale with both of its hooks hanging on a support bar.
The support rod consists of a bending-resistant metal rod 1 having four bores 3 each serving to hang up a clothes hanger, and with the two hooks 2, 2', each of these hooks being freely swingably fastened on one of the ends of the bar 1.